ARTIS GILMORE SPEAKS OUT ABOUT SHAQ 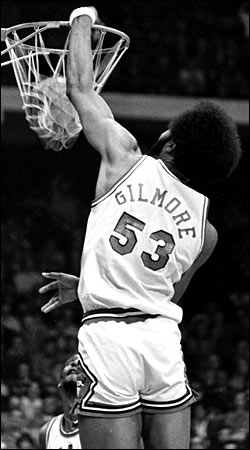 Artis: if you were playing against Shaq, what would you do on defense and how would you come at him on offense?

The rules of engagement haven't changed very much from the earlier years when I played the league. The best offense players are frequently not matched against each other in games. The key reason is to prevent foul trouble for offense threats, especially with big men during the early stages of the games. Of course, as the game moves forward there are occasions where the big guns go head-to-head. If I were to have had the opportunity to face Shaq I would work to prevent him from catching the ball on the box near the basket. That would mean using phyical strength to force him to catch the ball further away from the basket, and to make him use more energies on all attempts to receive the ball on offense. Many centers simply don’t have the power to do that with Shaq, but hat was exactly the type of physical game I was able to play for many years and I certainly believe that would be my edge against him.

For more about Artis Gilmore --- or to e-mail
questions to A-Train --- please visit:
WWW.ARTISGILMORE.COM
Posted by STILL HERE at 7:07 PM 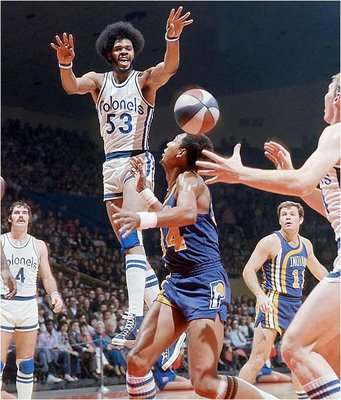 As one of only three NBA players to be on the same team with both
Michael Jordan and Larry Bird, you have a first hand knowledge of
what made them great. Watching LeBron James, do you have a prediction about whether or not he has the ability to live up to expectations?

I haven't had the opportunity to observe LeBron James during any of the CAVS practice sessions with his coaches and teammates, but from afar he certainly shows a great appreciation for the game and seems to be growing up with the same perspectives that I remember from other great players like Larry Bird and Michael Jordan. Respect for the game and for one’s teammates translates into leadership qualities on the court. If LeBron continues in good health h

e certainly will be one of the truly great players to watch in the near future.

For more about Artis Gilmore --- or to e-mail
questions to A-Train --- please visit:
WWW.ARTISGILMORE.COM
Posted by STILL HERE at 5:15 PM

ARTIS GILMORE SPEAKS OUT ABOUT THE 2006
SAN ANTONIO SPURS 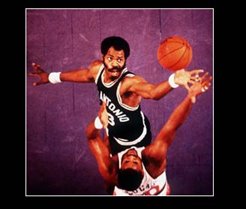 As a former SPURS you've probably been following the San Antonio versus Dallas playoff series. What do the SPURS need to do to recover and get passed the MAVS?

Unfortunately my beloved SPURS may not have the ability to recover
from this very difficult deficit against the newly revitalized Dallas Mavs.

If I had the opportunity to make some suggestions to this SPURS team, it certainly would focus on the fact that on defense the larger Dirk Nowitzki has been guarded with a smaller defender like Bruce Bowen. As good as he is, Bruce just just doesn't have the size to match up with Dirk. The imbalance in defense is also evident by the fact that the SPURS are giving up way too many points. Reliability on defense is key to success in any game, but especially so in the playoffs.

For more about Artis Gilmore --- or to e-mail
questions to A-Train --- please visit:
WWW.ARTISGILMORE.COM
Posted by STILL HERE at 5:08 PM

This ABA and NBA Legend
Deserves To Be In The Basketball Hall Of Fame.

• Named to Sporting News’ Top 50 of the first 50 Years of the NBA
• Named to Athlon’s Top 50 of the first 50 Years of the NBA
• ABA Championship, Kentucky Colonels, 1975
• Career .599 field-goal percentage - highest in NBA history
• 3rd highest shot blocker in pro basketball history (3,178)
• 4th highest rebounder in pro basketball history (16,330)
• 14th of all time pro basketball scorers (24,941)
• Leading left-handed scorer in professional basketball history
• One of only eight players in college history to average
20 points and 20 rebounds per game over a career
• All Star in 11 of 17 years as a pro
• 5th best all-time for pro minutes played (43,836)
• Played 670 consecutive games
• ABA Most Valuable Player and Rookie, 1971-72
• ABA single-season record for the most blocked shots (422)
• All-time ABA rebounds per game (40)
• Won 4 out of 5 ABA rebounding titles
• Led Jacksonville University to the NCAA championship final game vs UCLA in 1970
• Top of ESPN’s list of “Players Missing From The Hall Of Fame”
For more about Artis Gilmore --- or to e-mail
questions to A-Train --- please visit:
WWW.ARTISGILMORE.COM
Posted by STILL HERE at 1:25 PM